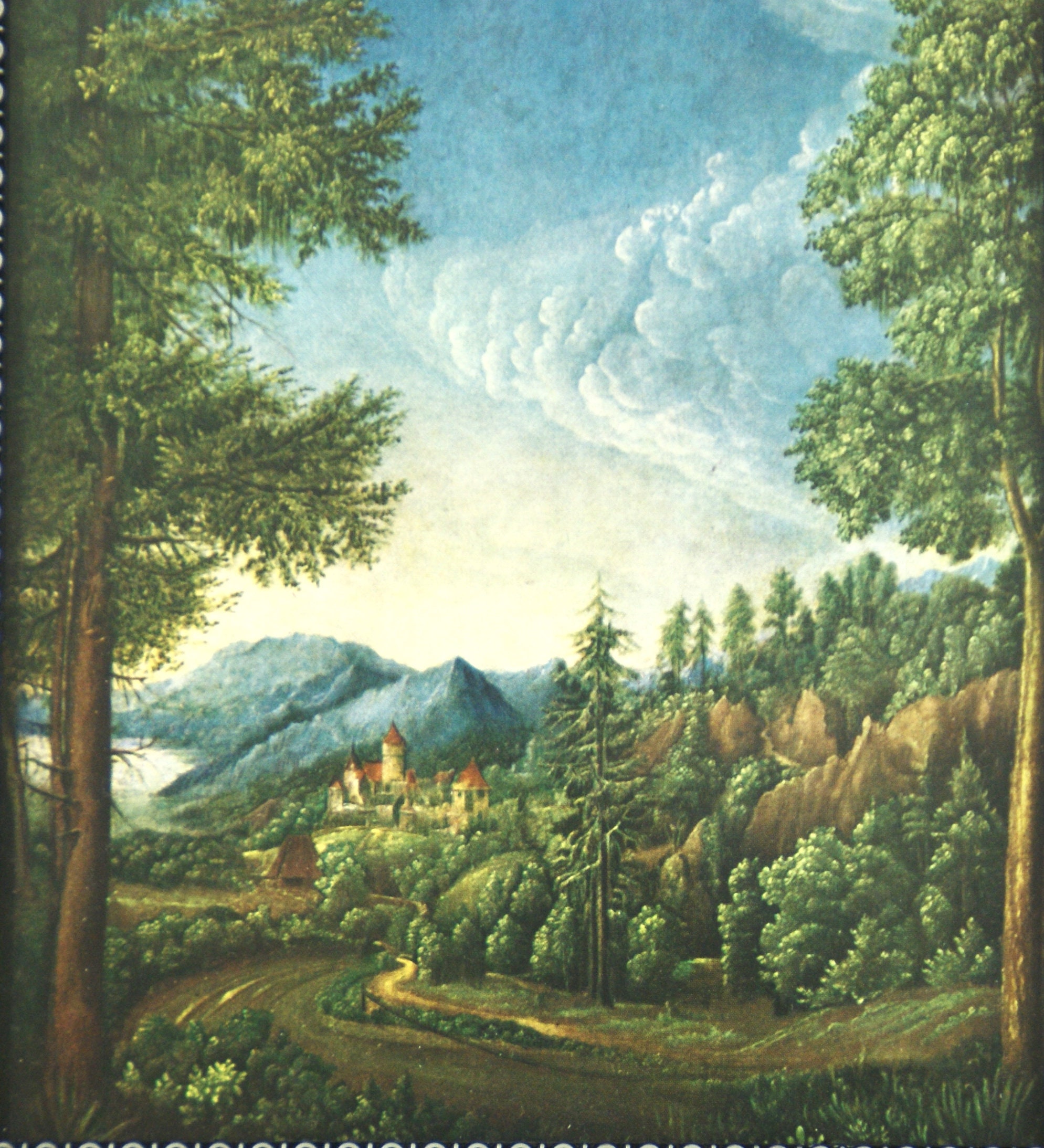 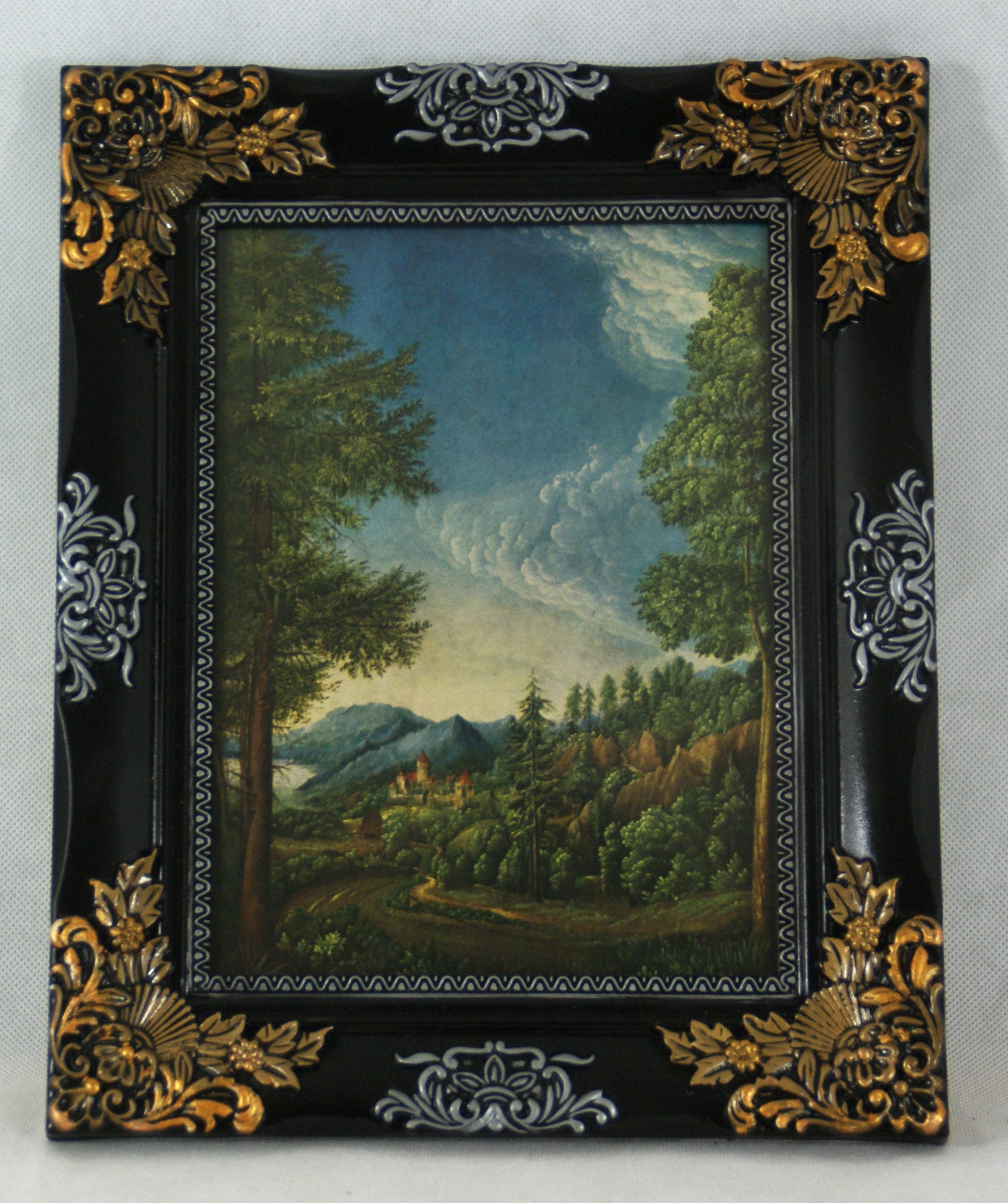 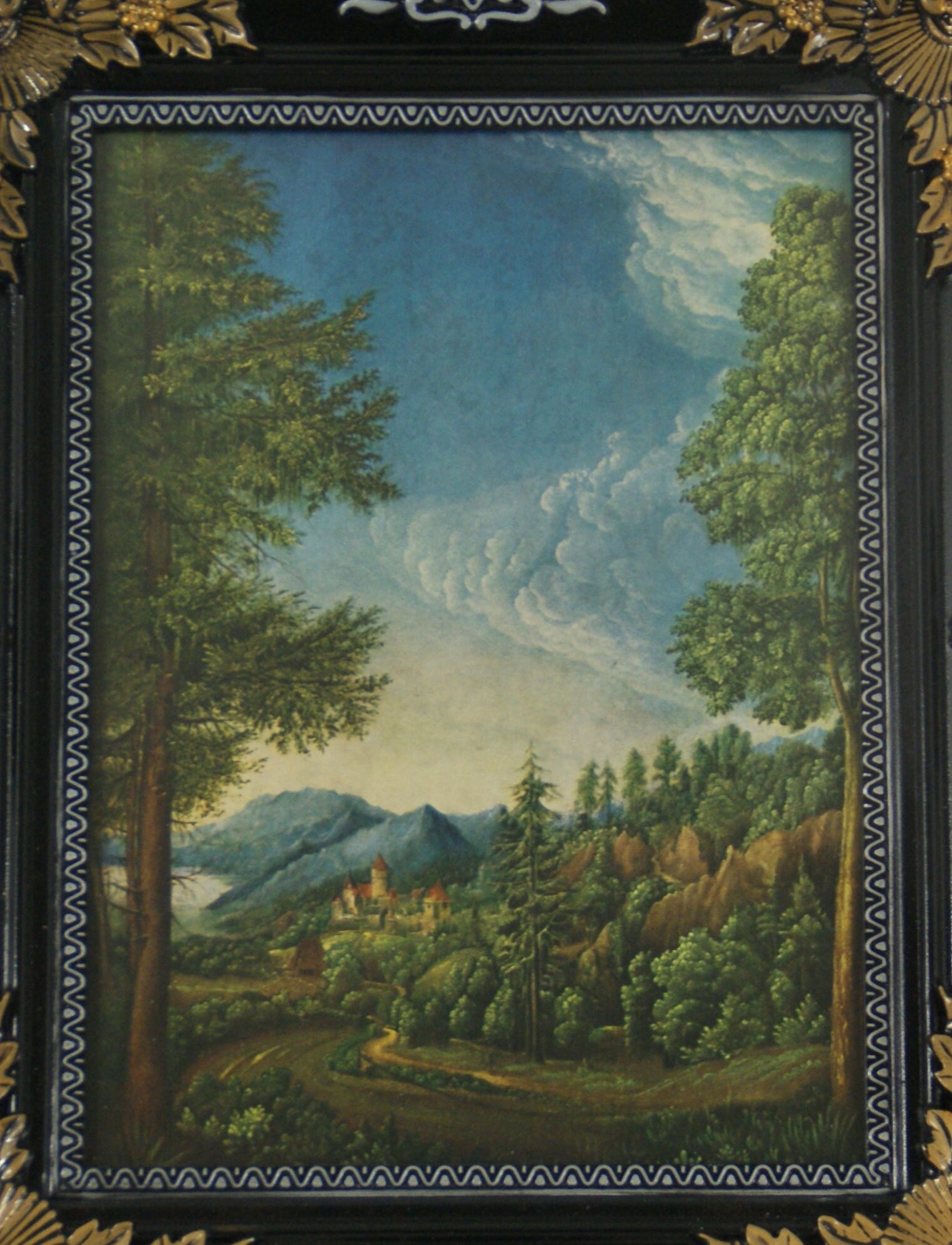 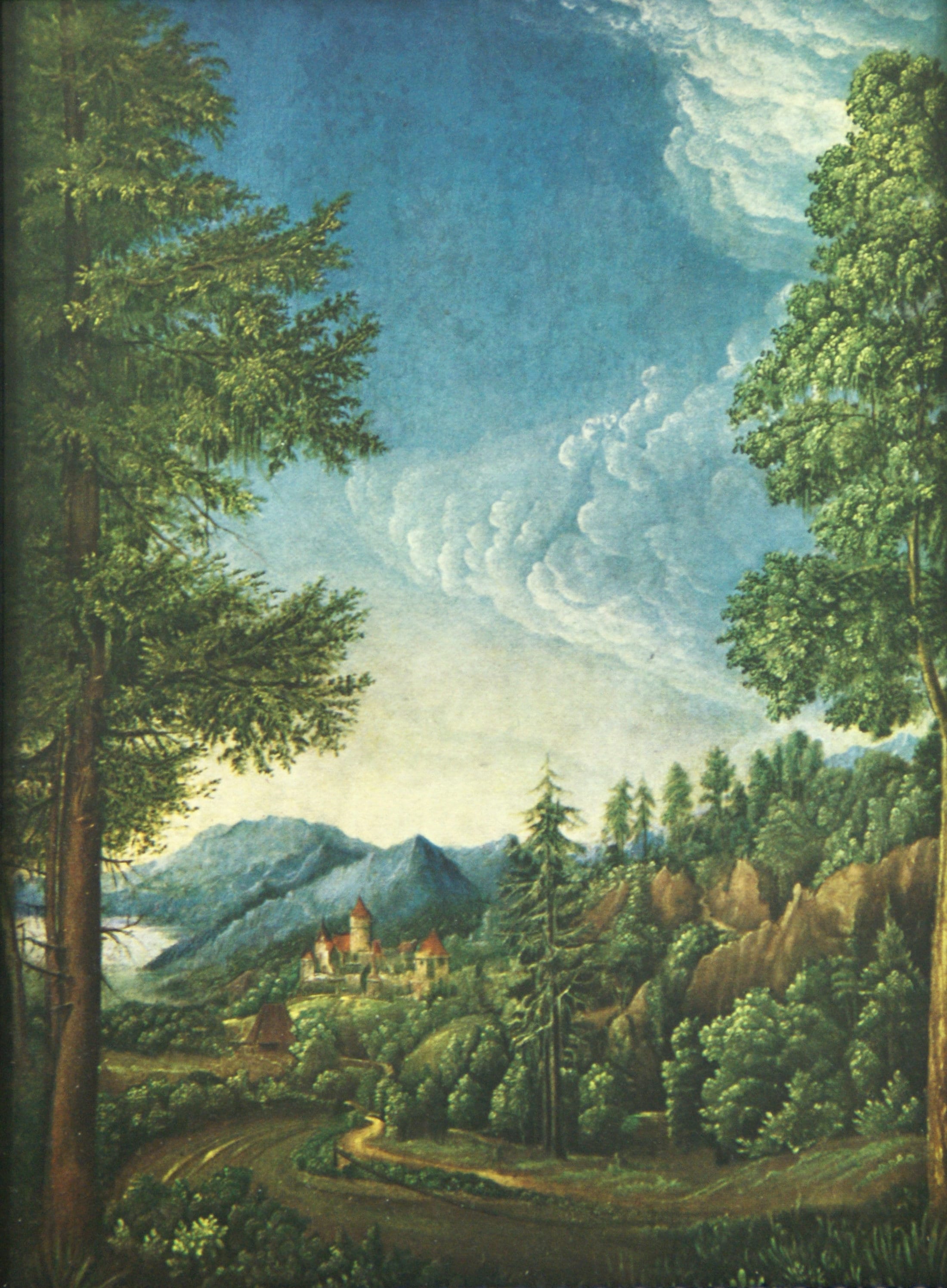 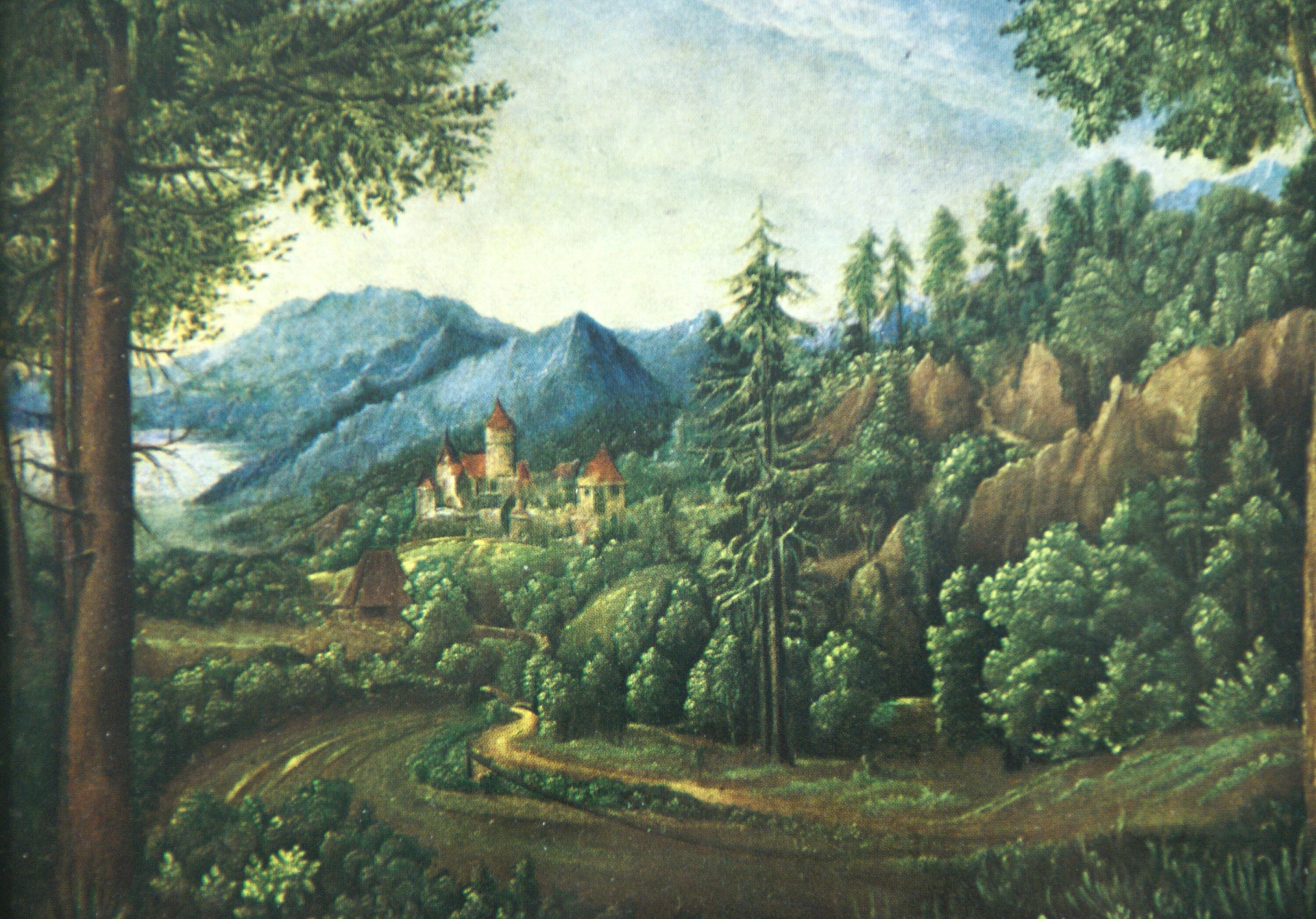 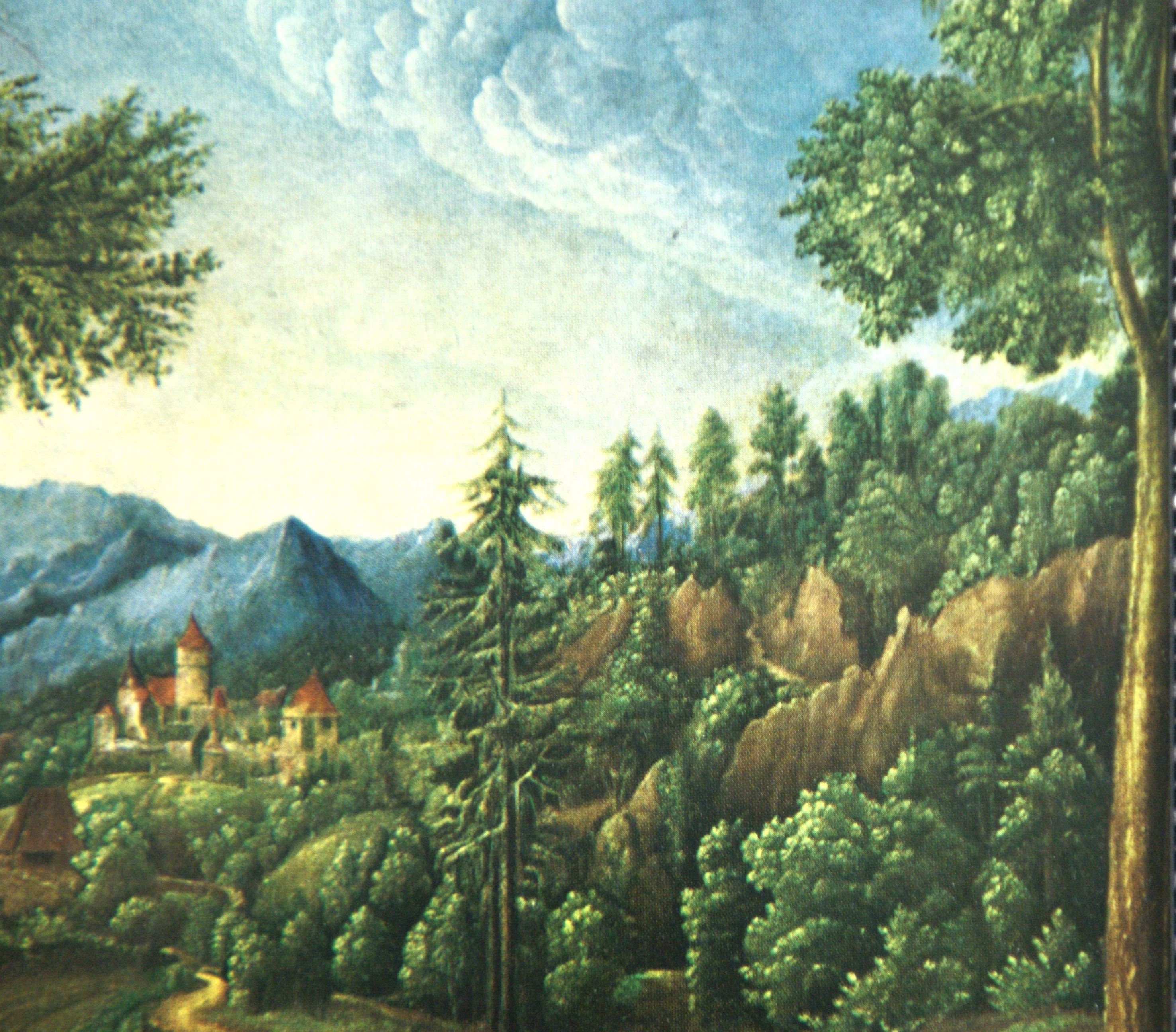 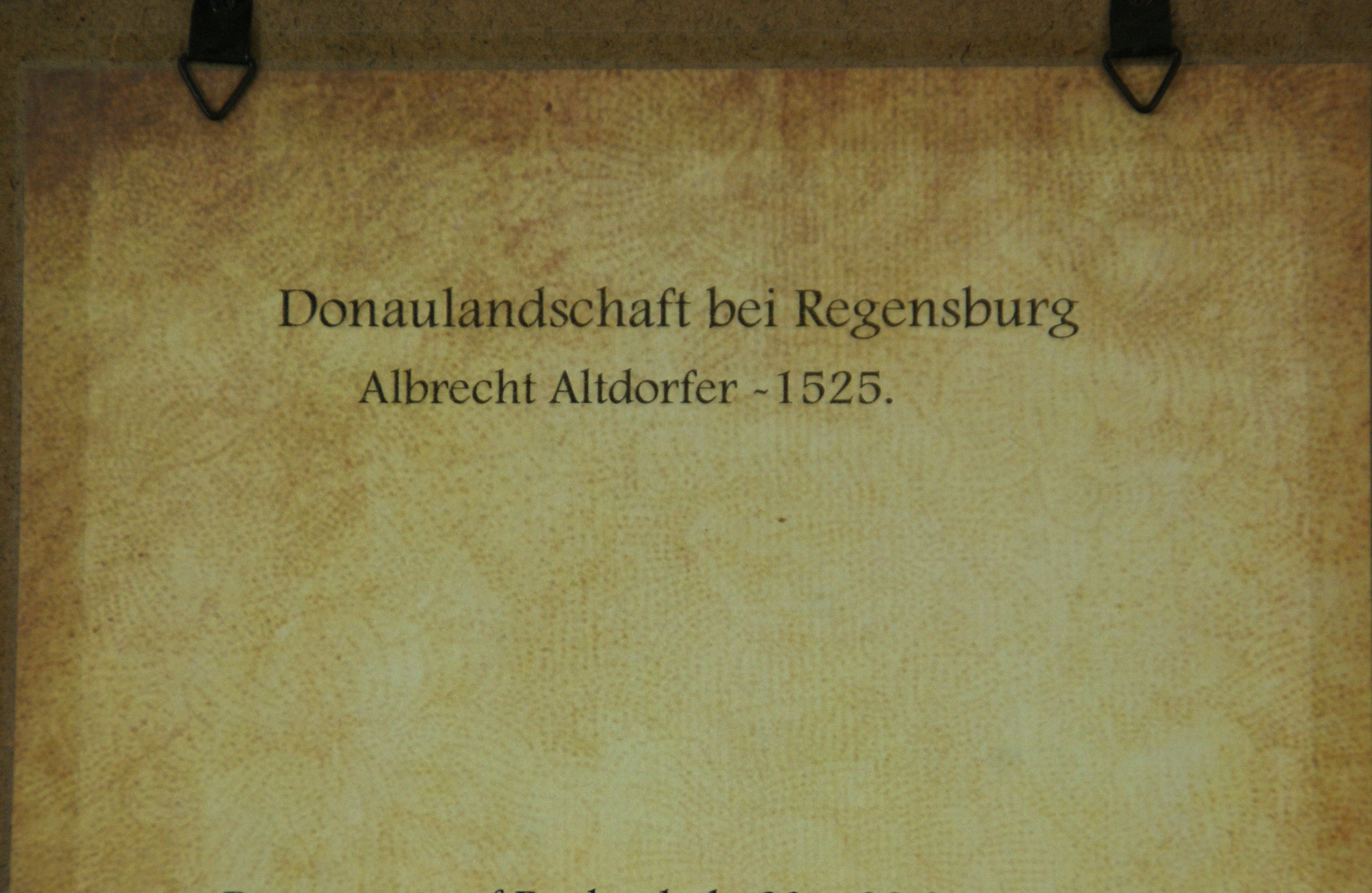 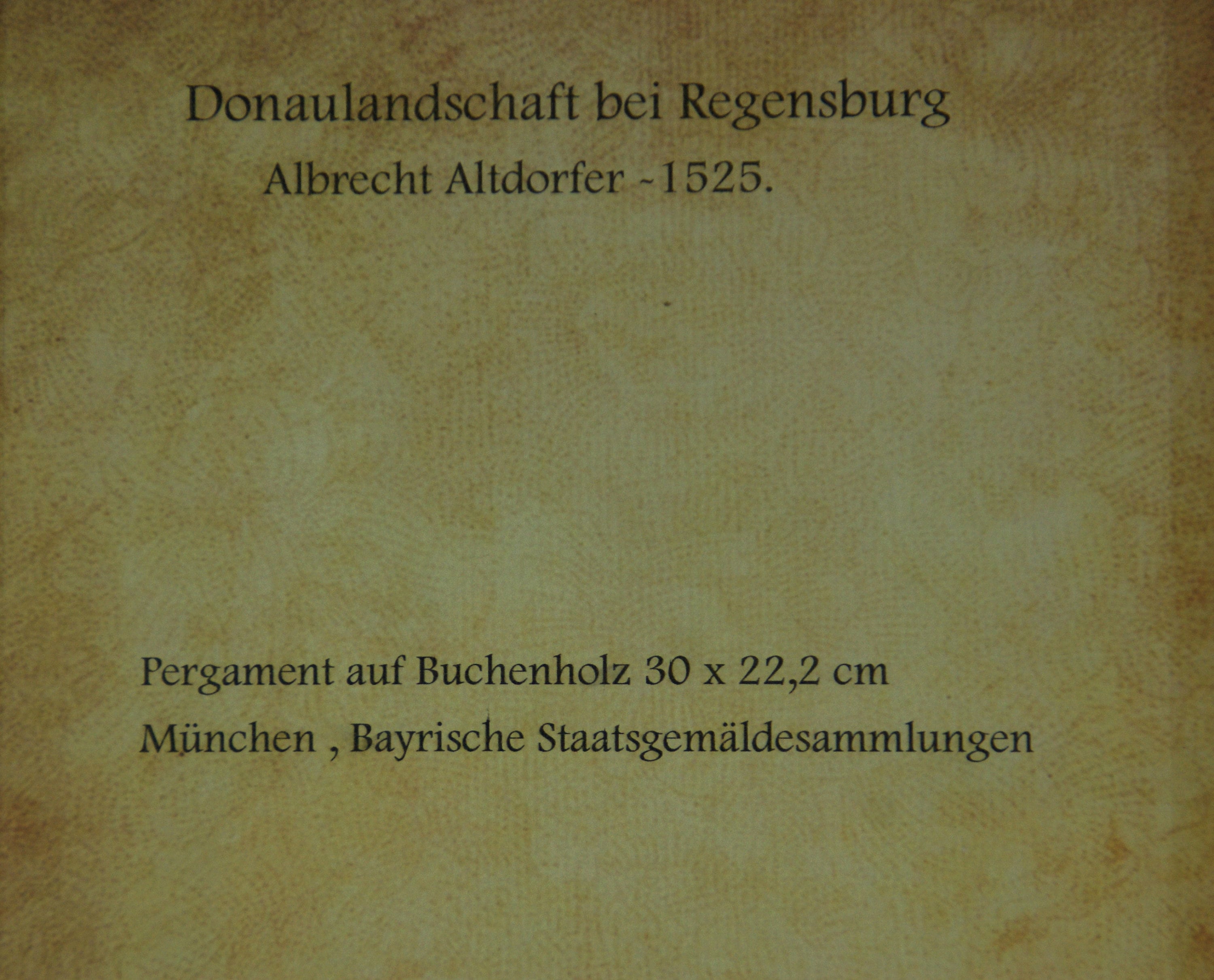 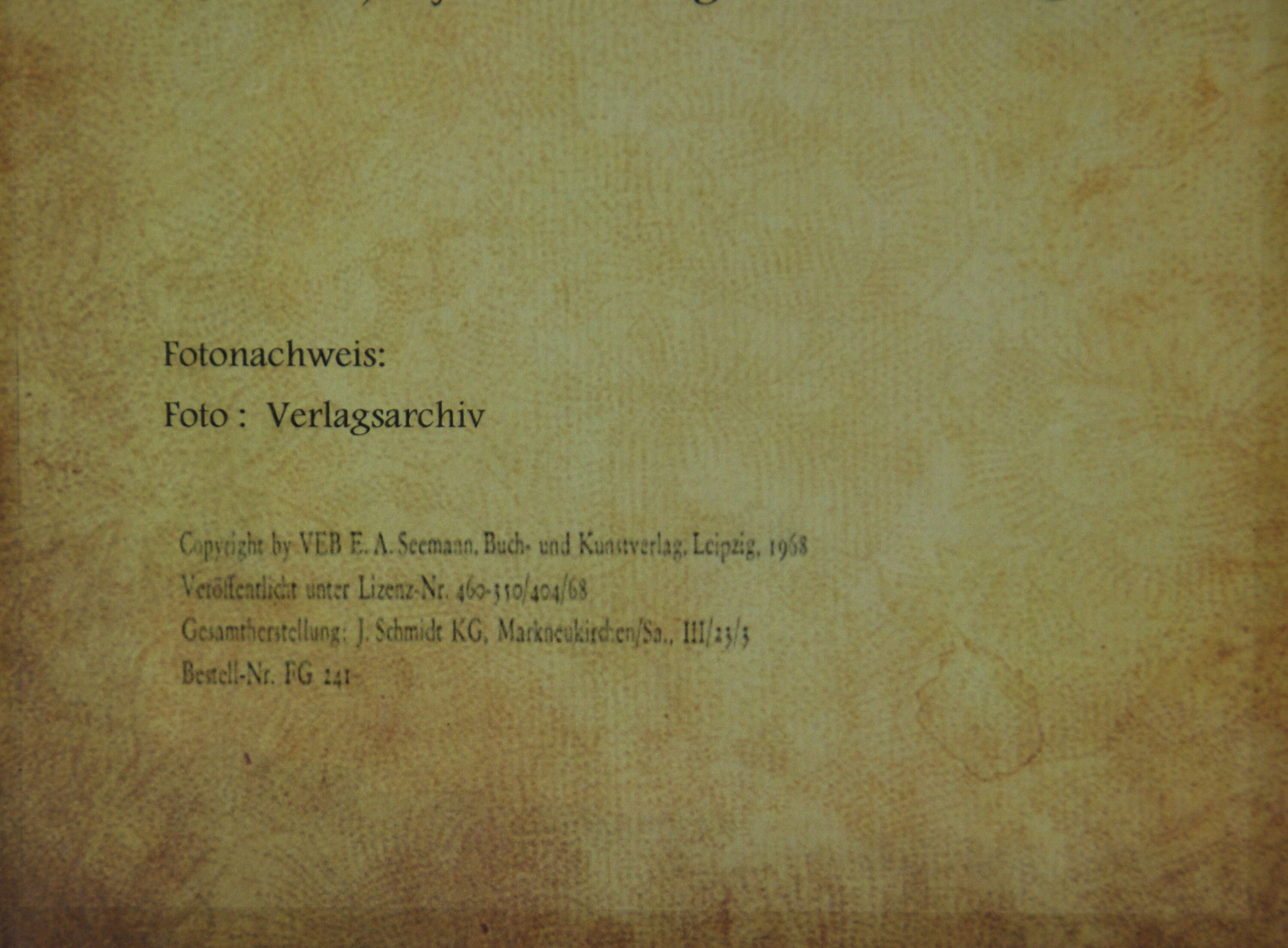 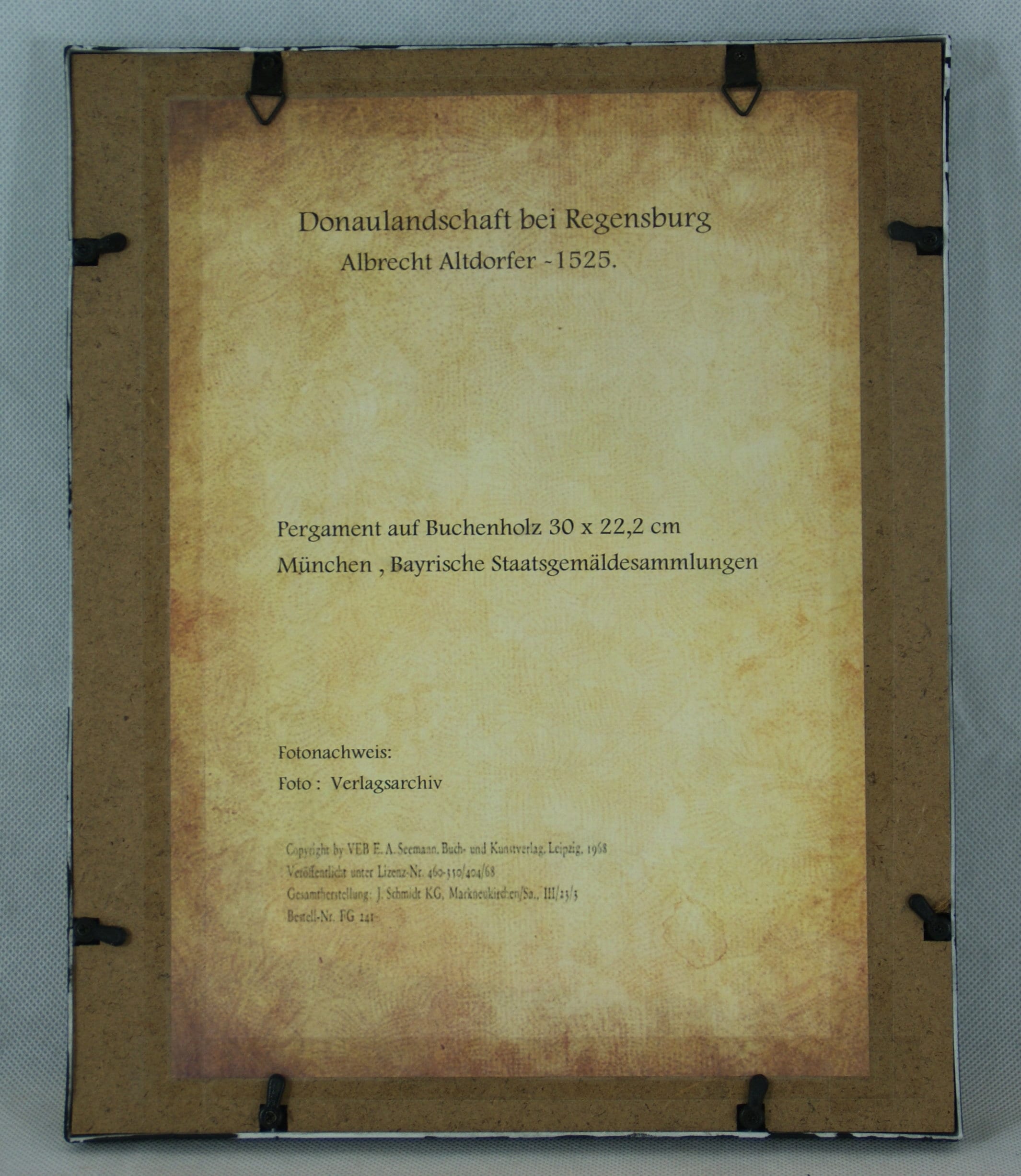 Painting is one of the first independent landscape paintings in European art, which is why the work has a prominent position in the history of art. The motif of the landscape moves for the first time in the center of the representation and no longer serves only as a background for an independent plot. The Bavarian landscape around Wörth Castle near Regensburg is shown in this image.

Albrecht Altdorfer is a German painter, graphic artist and builder who was probably born around 1480 in Regensburg, the son of the painter Ulrich and the brother of Erhard Altdorfer. He died in Regensburg on February 12, 1538. The exact date of his birth and his artistic beginnings are unknown.

Altdorfer is considered a pioneer of European landscape painting, a "discoverer of the German landscape" and one of the main masters of the so-called "Danube Schools". Its period of creation is part of the late German Gothic on the threshold of the Renaissance.

Throughout his life he was closely associated with his hometown, Regensburg, where he acquired his citizenship in 1505. From 1519 he became involved in city politics as a member of the city's outer council and from 1526 as a member of the inner council. However, he refused the honorable job offered to him as mayor of the city in 1528 because he had taken over a large commission for the Bavarian Duke Wilhelm IV, probably the "Battle of Alexander".

55 paintings by Albrecht Altdorfer, about 120 drawings and over 200 woodcuts, engravings and woodcuts have been preserved to this day.

In his early creative period, Albrecht Altdorfer devoted himself primarily to Christian and mythological motifs. Examples of this include the "Battle of the Dragon" from St. George (created in 1510) and the "Family of Satires" (1507). It is already clear in these works that he gives the landscape, which still serves as staff for the actual action, a lot of space in the image.

It was not until around 1520 that Altdorfer found his way into independent landscape painting. In doing so, he sought to design the landscape, as only Albrecht Dürer or Leonardo Da Vinci did in his day, whom he saw as artistic models. He made a series of drawings and engravings of pure landscape and, like Dürer and Da Vinci, attached great importance to the study of nature. For Albrecht Altdorfer, exploring nature and its exact reproduction was the focus.

His "Danube Landscape" is the first pure landscape painting to reach us from the late Middle Ages.

Delivery combined with more than 2 items.
If you want to buy more than 1 item, please send me a message, I will give you a nice discount and adjust the shipping cost if necessary. Shipping costs from 0-2 kg are the same, the price changes upwards from 2 kg.
We are a sustainable store. All our items are carefully packed with clean recycled materials and in good working order.
Please provide your phone number so the courier can contact you if you are not at home when the package arrives.
Thanks

0 items in your cart