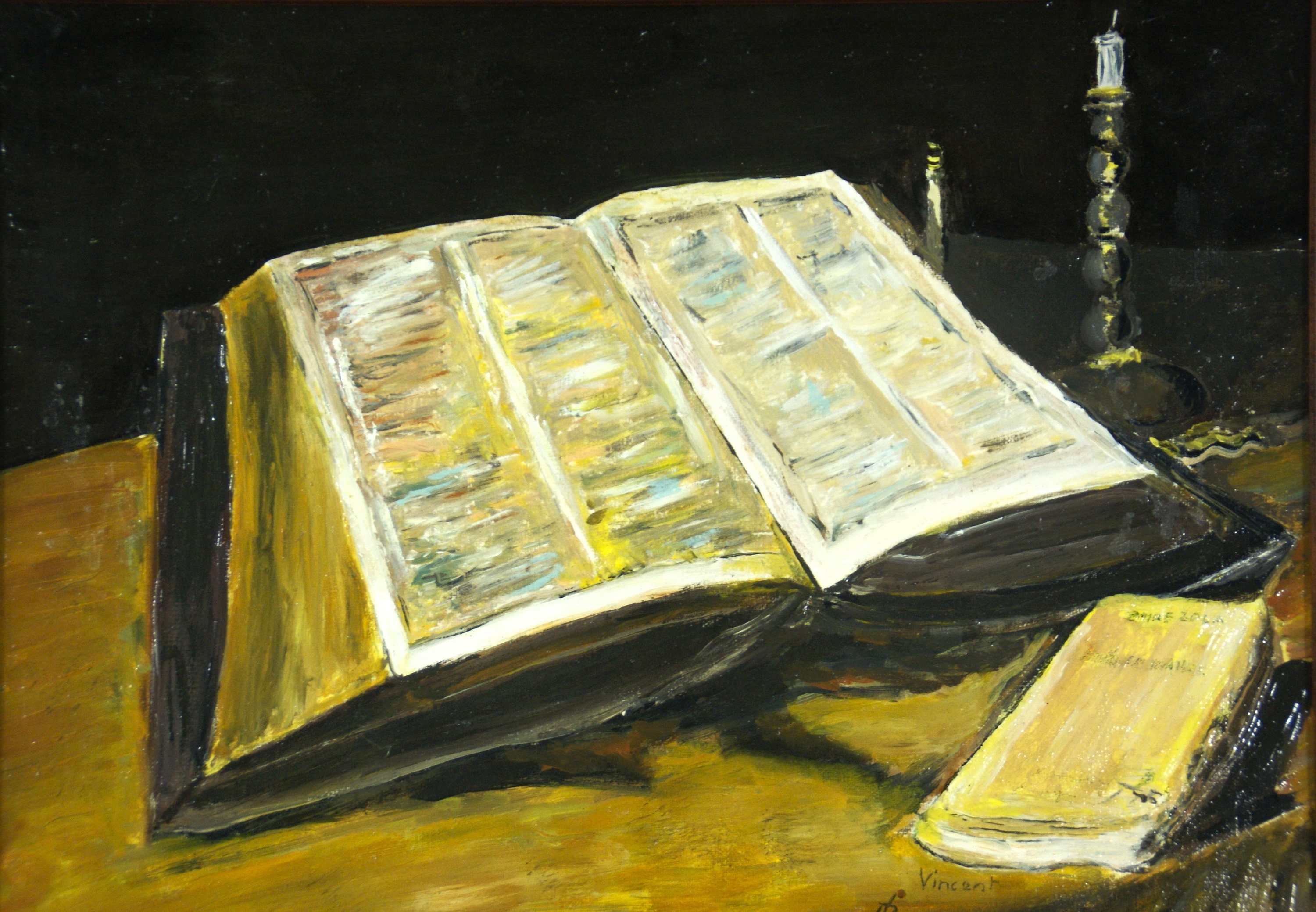 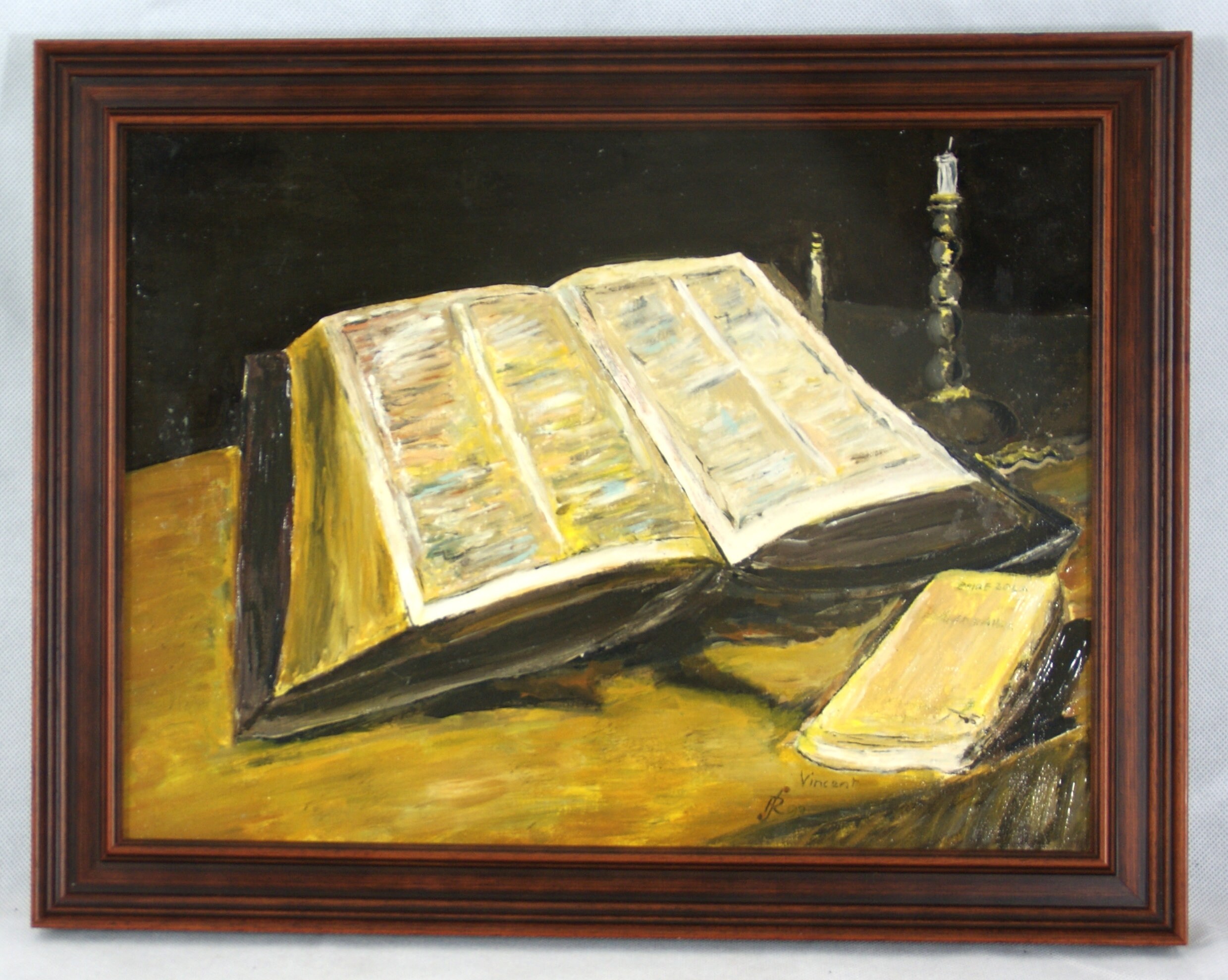 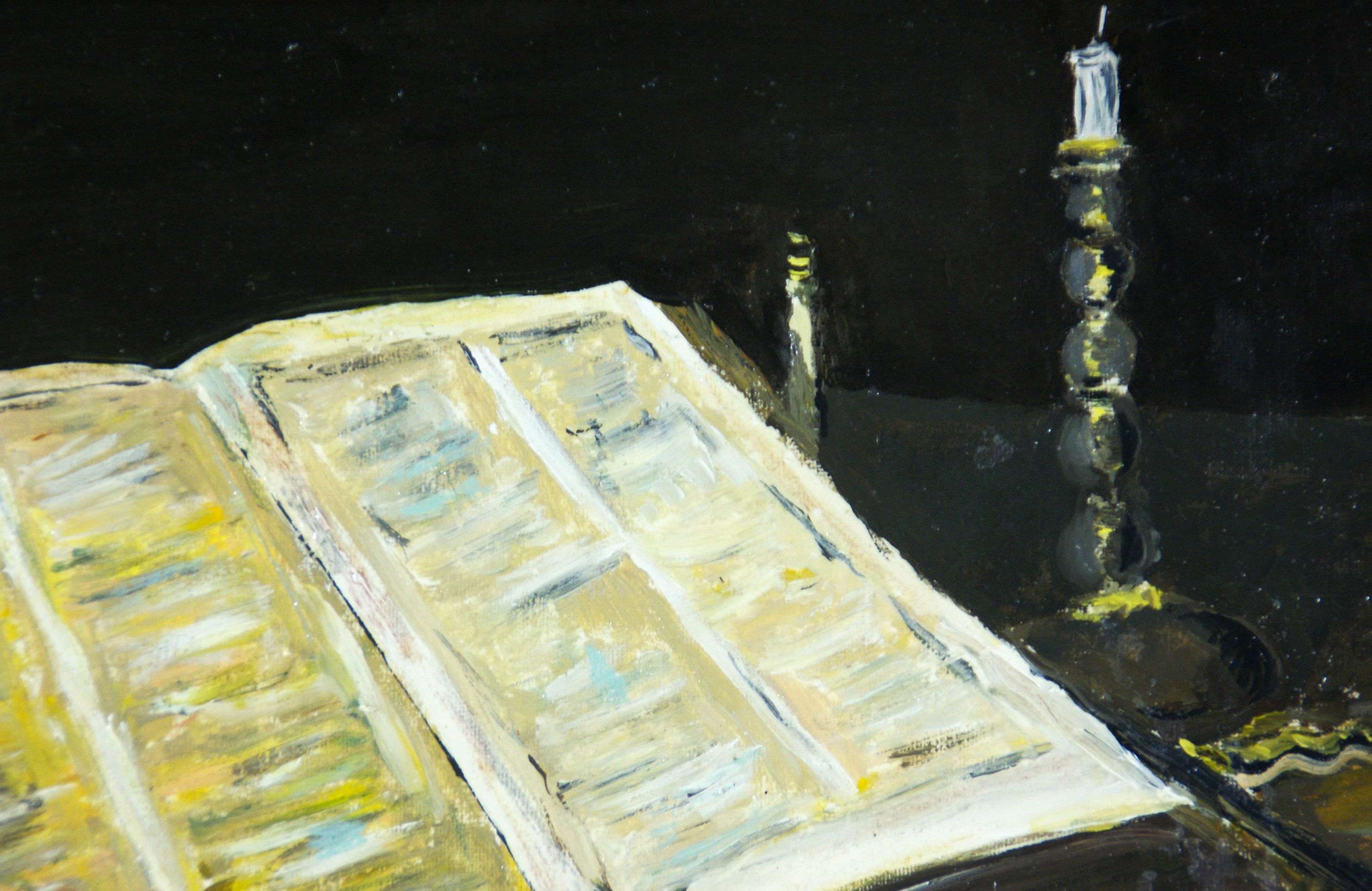 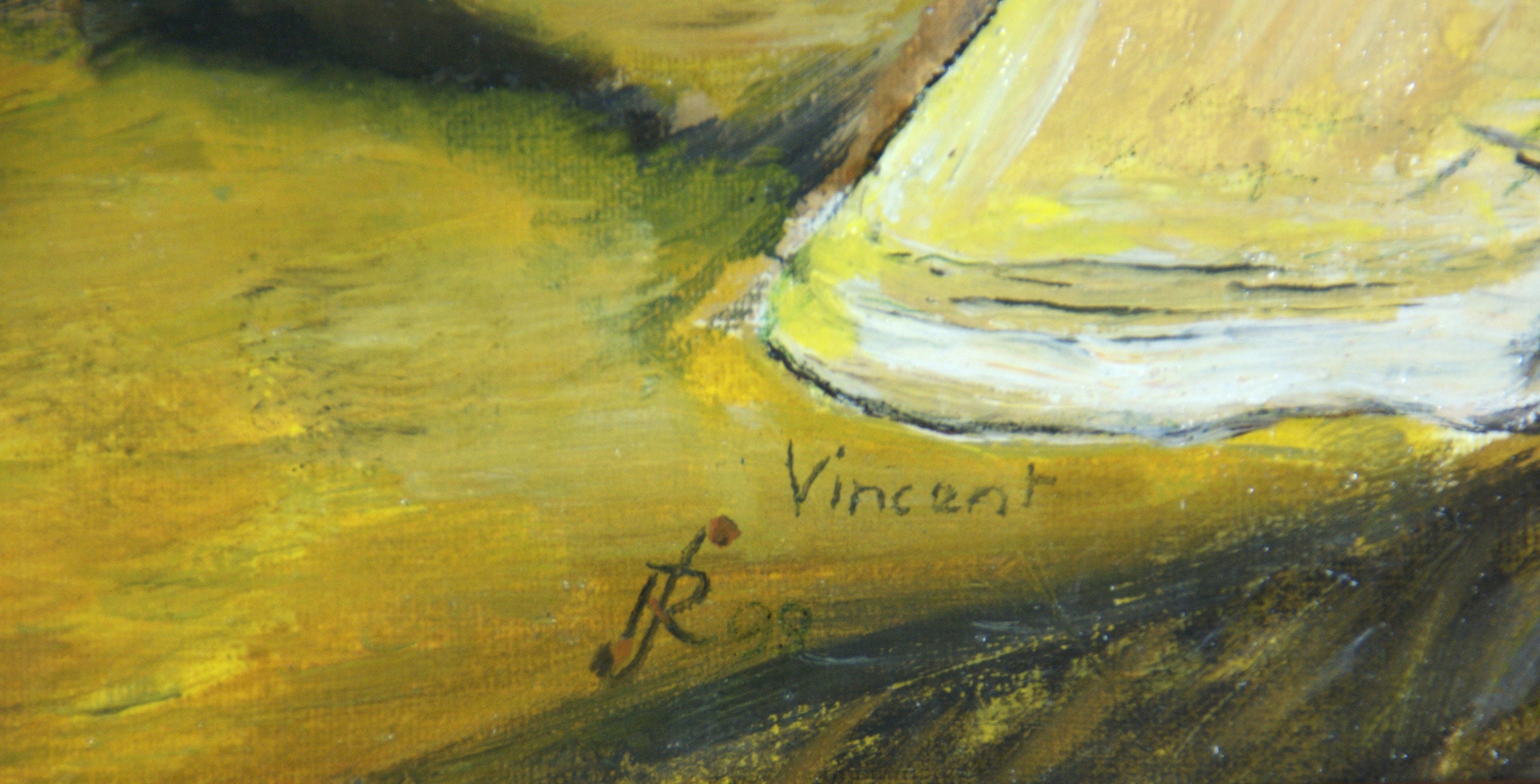 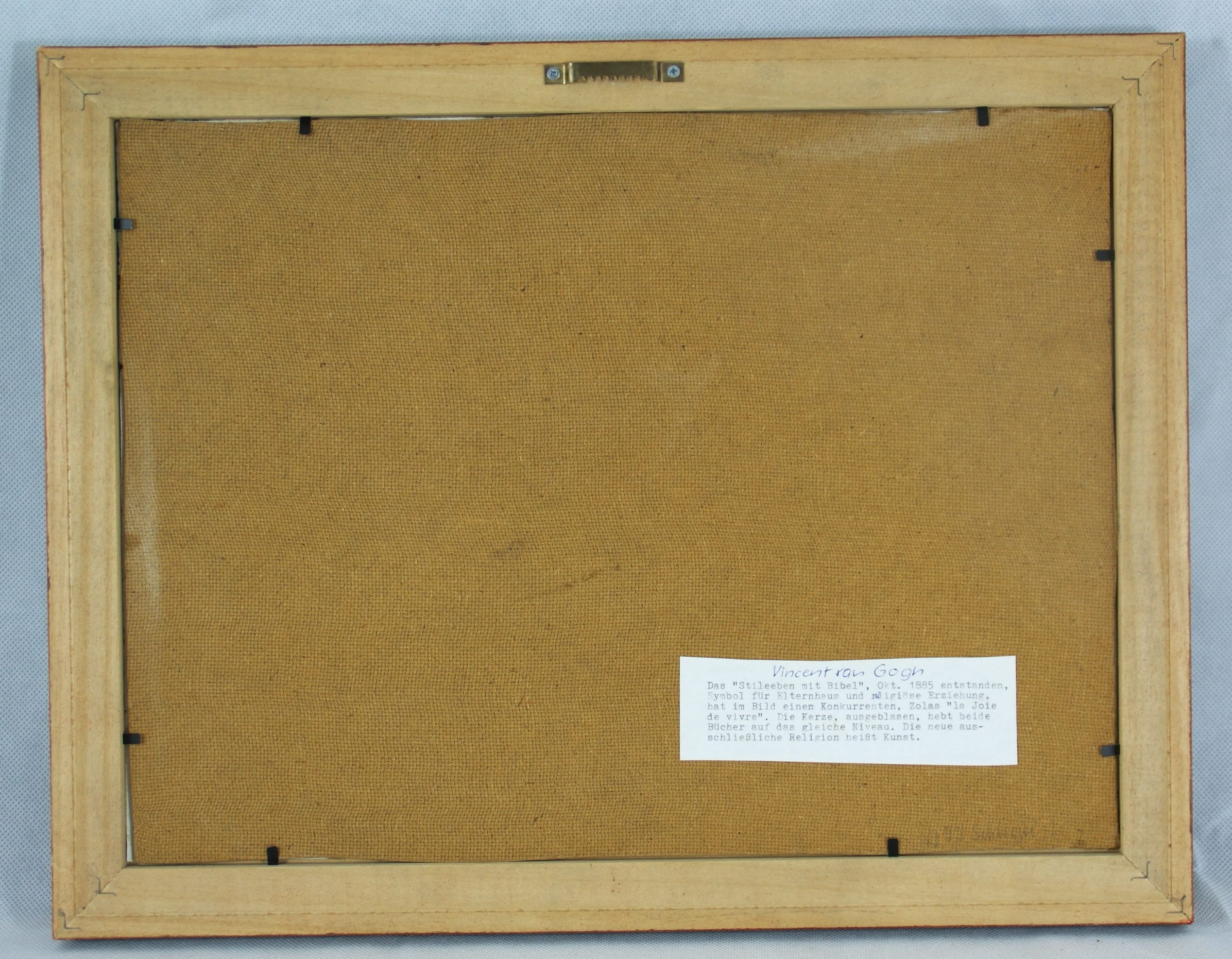 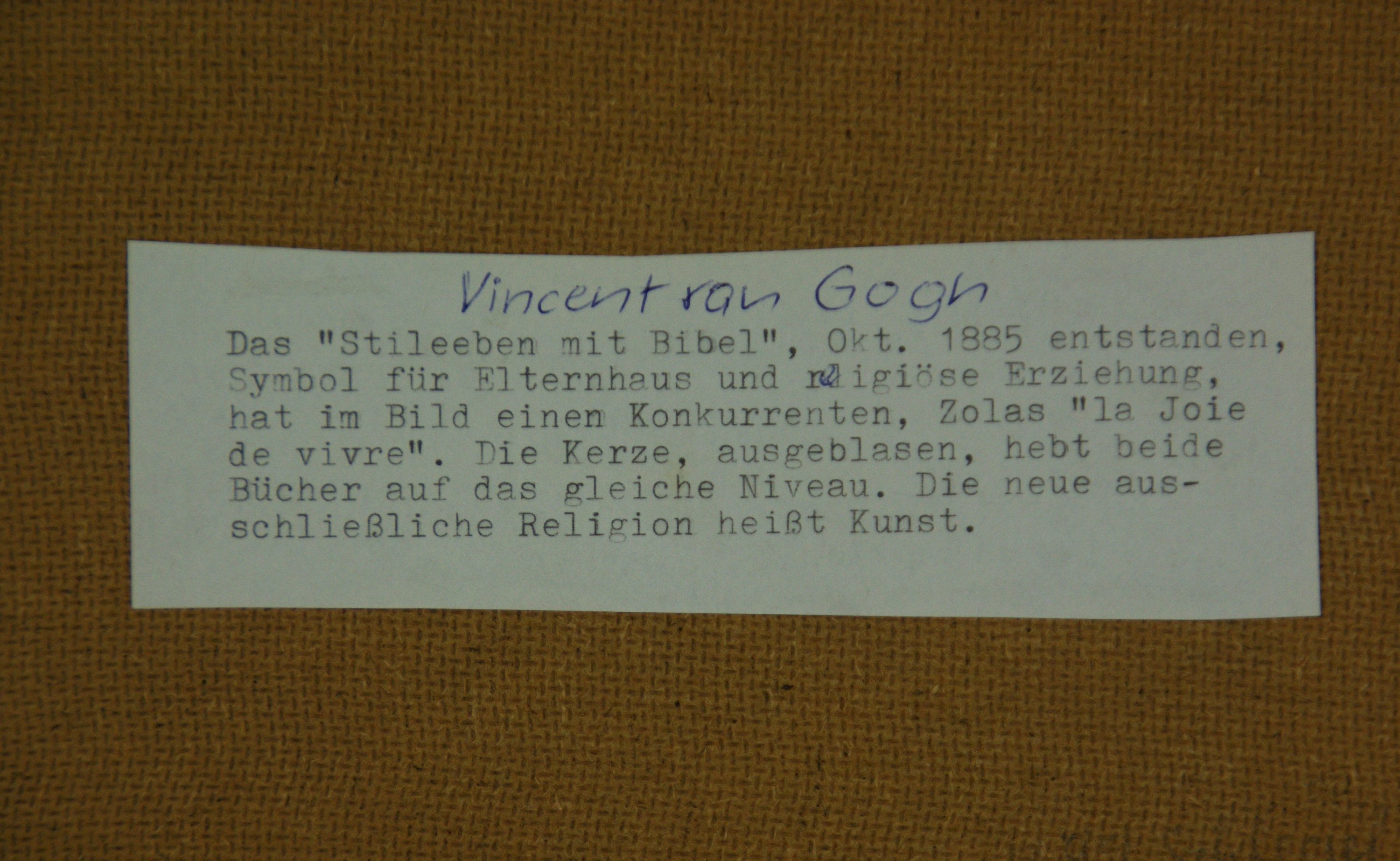 Still life with the Bible
A beautiful vintage reproduction of the famous painting.

Vincent van Gogh (1853-1890), Nuenen, October 1885
This large Bible belonged to Van Gogh's father, a Protestant pastor. Van Gogh painted it immediately after his father's death. Next to it he placed his own copy of Émile Zola's La joie de vivre. That book was a kind of "bible" for modern life. The books symbolize the different worldviews of Van Gogh and his father.

Vincent described this work to Theo as "a still life of an open Bible, so almost white, bound in skin, on a black background with a yellow-brown foreground, with an extra note of lemon yellow." He wanted to show that black could be effective. The brothers had discussed this question at length before.

Theo thought Vincent's sails were too dark and gloomy. He encouraged his brother to use lighter and brighter tones, as the Impressionists did.

Taken by the artist from Nuenen to Antwerp, November 1885; taken by the artist to his brother Theo van Gogh, Paris, at the end of February, 1886; after his death on January 25, 1891, inherited from his widow, Jo van Gogh-Bonger, and their son, Vincent Willem van Gogh, Paris; administered until her death on 2 September 1925 by Jo van Gogh-Bonger, Bussum / Amsterdam / Laren; lent by Vincent Willem van Gogh to the Stedelijk Museum, Amsterdam, December 16, 1930; transferred by Vincent Willem van Gogh, Laren, to the Vincent van Gogh Foundation, Amsterdam, 10 July 1962; Agreement between the Vincent van Gogh Foundation and the State of the Netherlands, by which the preservation and management of the collection and its placement in the Rijksmuseum Vincent van Gogh, to be held in Amsterdam, is entrusted to the State on 21 July 1962; lent until the opening of the museum on June 2, 1973 to the Stedelijk Museum, Amsterdam; on permanent loan to the Rijksmuseum Vincent van Gogh since 2 June 1973 and to the Van Gogh Museum, Amsterdam, from 1 July 1994.


Delivery combined with more than 2 items.
If you want to buy more than 1 item, please send me a message, I will give you a nice discount and adjust the shipping cost if necessary. Shipping costs from 0-2 kg are the same, the price changes upwards from 2 kg.
We are a sustainable store. All our items are carefully packed with clean recycled materials and in good working order.

0 items in your cart